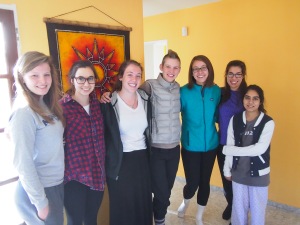 It is a pleasure to introduce to you the students from our Fall 2014 (or Spring, if you are looking at things from Argentina) cohort of Casa de la Mateada. They have arrived here from different parts of the United States and from different Jesuit Universities–LMU, Boston College, St. Louis University, Gonzaga University and Spring Hill College–to open themselves to an exciting, challenging (and yes, sometimes bewildering) experience of living, studying, learning, traveling in and being changed by Argentina.

How are they being changed? It is probably too early say. But already these students have distinguished themselves by their readiness to throw themselves into the life of this place, to open themselves to the experience of being here. That takes courage. And a willingness to allow yourself to be vulnerable.

The brief introductions below were written by the students. They interviewed each other and composed brief sketches of their classmates: those characteristic features that have already begun to emerge during the first few weeks of the program. You will enjoy meeting them. And a little later on, you will hear more from them directly.

The mighty Helen hails from Cleveland, Ohio and is currently at Saint Louis University studying Economics (along with International Studies, Spanish and Urban Poverty Studies). She is pure, sweet, and strong. She has the spirit of both a playful child and of a fierce wolf. One time, her parents told her she wouldn’t be able to run a marathon, so she signed up for one and ran it the next week. Helen is badass. In her spare time here at Casa de la Mateada she likes to build benches in the backyard and play soccer with the boys. She is also the master of pranks.

The indescribable Claire Horrigan made the trip all the way from her home of Greenwood Village, Colorado to Córdoba with her giraffe pillow pet, Wilbur (and her sense of adventure) in tow. She is in her third year at Boston College, studying economics with a minor in Faith, Peace, and Justice. Claire loves to run and to be outside; she also loves baking delicious pasteles, painting and making art. In Boston, she likes to volunteer with Saint Francis House, eat cannolis, and generally obsess over the Jesuits. She loves the beautiful architecture and the antiquity of the churches in Córdoba, and is amazed at the welcoming nature of the Argentines. She thinks that the warm and loving culture here and the continual besos are wonderful!

Farah’s adventurous spirit has led her all across the world! From Tajikistan to China to Korea, nothing is too foreign for Farah. And now, Argentina. Farah enjoys listening to music, chatting with her friends, drinking coffee in mom and pop cafés, and taking long walks. One of her major talents and hobbies is photography, which she picked up from her roommate in China who had a camera. She most enjoys capturing nature and candid photos of her friends in their funny moments. In addition to this, Farah also has a passion for languages. She believes that they allow you to communicate and develop deeper relationships with people of other cultures, which would explain why she has chosen Modern Languages as her major!

Maddie enjoys making chistes. Poquitos chistes. She hails from the land of alligators, jambalaya, and voodoo. Her motto, “¿porque no?” allows her to embark on many great voyages while wearing her trusty chacos. As a theology and psychology double major at Springhill College in sweet home Alabama, all Maddie does is read, read, read, no matter what. Maddie also enjoys long runs, immersing herself in Latin American culture, and eating chocolate. Maddie is a ray of sunshine, even in Casa Sol.

Ladies and gentlemen, meet the one and only Rachel Nease. A true Fort Collins, CO, native, Rachel loves the outdoors, especially the mountains. She is a junior at Gonzaga University, majoring in biology and minoring in Spanish. Rachel loves working with adults with disabilities through GUSR (Gonzaga University Specialized Recreation). When she’s not studying or volunteering, you may find Rachel playing some variation of a string instrument. We at the house are hoping for a concert one of these days . . . In true Rachel-fashion, some of her favorite things about Córdoba so far are the beauty of the Sierras, churches and graffiti. She is looking forward to getting to know the people of Argentina and learning the culture and language.

Abbi seizes each day with an ambitious, joyous disposition, often expressed through her graceful, energizing dance movements (she is a dancer). This LMU student’s pursuit of knowledge and spiritual growth is ceaseless, propelling her into dynamic conversations and sometimes carrying her across continents. Spanish proficiency has quickly integrated itself among this nature lover’s other tongues (including Swedish, French, English and even. . . cat!). Abbi, a Pennsylvania native, is studying Dance and Theater and looks forward to exploring deeply rooted unconscious patterns within herself this semester.

This beautiful chica hails from the coast of sunny California, specifically Huntington Beach. She has brought her love for fun in the sun with her and enjoys going for jogs or walking around town. As a self proclaimed people person, she has gotten to know many Argentinians already. Due to her love for staying in motion, she is almost never sitting down, but once in a while she will take a break to read and will read just about anything and everything.

Do you want to learn about a particular aspect of the Casa de la Mateada program? Click the tags below to learn about, say, the city of Córdoba, our praxis sites, or even the delicious food our students enjoy while in Argentina!